Dirt cheap build from a newbie

Offroad VW based vehicles have problems/insights all their own. Not to mention the knowledge gained in VW durability.
Post Reply
321 posts

Dirt cheap build from a newbie

Ok, so I signed up and posted an intro back over a year ago after lurking for a long time and being a member of RAMVA. I've been working my way back through the forum archives, reading everything I can so thanks to all of you for the knowledge you have shared. Anyway, my first idea was to tear into my '68 and make a baja, then I got seduced by volksrods and almost went that way, but as you know, life has a way of getting in the way and after a sputtering start over a year ago, nothing happened. After much thinking and soul-searching, I decided that eventhough a vrod would really look cool in my driveway, it isn't very practical nor is it what I really wanted to do in the first place. So, in a circular way, I'm starting what I started but didn't start last year. Confused yet? I am. What I have is a pretty rust-free '68 Beetle that I picked up several years ago for $1500 and drove as a DD for a year or so, then parked it cuz I wanted to have a project. I've stripped the interior, cut off the rear apron...and then stopped. Now it is time to get back to work. My plans are an all steel baja with more than a passing nod to the Emory baja but based on a '68 and not an oval. I might do things a bit differently but that is my goal, kind of a tribute car but kinda not. The biggest thing is I'm trying to do this on a VERY small budget. I'm not all that concerned about it because A) I built this from a basketcase for less than $400 including the cost of the bike:

B) I'm a pretty good scrounger

C) I have low expectations:)

For now I will keep the 1500SP and just add the header I traded for some old fenders, it already has an ooooold Screamer kit on it. I'm building a DP for it when the $$ allow, I already have the longblock.

Basic interior with recovered stock seat for now, though I will invest in good 5pt harnesses and a couple of extinguishers, beyond that I'll just sorta wing it:)

I'm going to cut down the front like the Emory baja and use Super front fenders on the rear cut down. I have already cut the apron off though it is not quite as extreme as some and I want to run a partial decklid since I am hoping to use this year round as a woods buggy and commuter. I already have some new 7.5x15 Mickey Thompson tires for the front (free from a fellow VW guy) and am going to run some 225/75-R15s on the back left over from my son's Grand Cherokee. I'm going to make my own tree bars and front/rear cages, that should test my welding skills.
This is what I'm starting with: 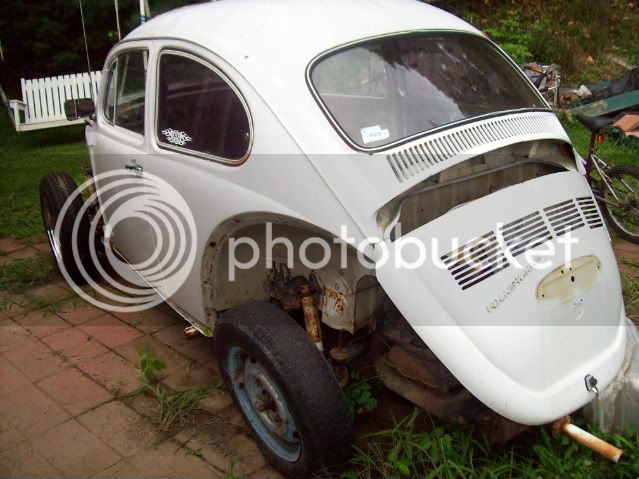 I figure if namelesswonder can stick it out and be on a budget, then I can too. With the cost of heating oil this year and living in New England, the budget for this build is going to be VERY SMALL, wish me luck![/img]
KC1MUR
Bringing bus back from hibernation
Dirt cheap, all steel baja build
70s ProRally SuperBeetle veteran restoration
Top

Well Sneaks, welcome (back) to the party! Keep us posted!

So you think your project is taking forever eh? Well you've got nothing on me.....
Top

looks good.
My project is done on a budget to.
i think its about $800 so far, and thats with the cost of the car.

But it still doesnt run yet

Hmmm, I think the bigger question is do you think my wife will like it right behind her head??
KC1MUR
Bringing bus back from hibernation
Dirt cheap, all steel baja build
70s ProRally SuperBeetle veteran restoration
Top

Hahaha my budget = part-time funds from a work-study job. So I think you could probably pull off something better than me (assuming you're not a college kid too hehe) in the ways of budgeting.

Looks like a good car to start with though, better than mine from what I see haha

It should be noted...budget means nothing. Cause we all know that these things go over budget pretty quickly. I think in this case, budget includes time as well as money. We originally thought my car would be running in a couple months, and we're coming up the year mark!
Franz the Thunder Pumpkin!
Permanent member of the "Baja may not be running" club
Top

If you need some cash for your project, sell your stock parts. I wish I would have done this first.

I'm only in the hole $10 bucks so far. I needed some parts to fix the old bug stuff, but this wasn't much either. Honest.
Top

Thanks for the encouragement and budget ideas. I've been selling off some of my extra parts to help with bills and finance this project...that and a lot of craigslist bartering. If I can unload my AS41 and extra IRS tranny, I'll be golden:)

I actually worked on it today, not as long as I had hoped but you know how it is, sometimes your priority isn't the rest of the worlds. Oh well. Seems like the biggest question I hear from people when I tell them I'm gonna do a baja is "where do you cut it?"

I have no idea.


This is my inspiration, most of you are probably familiar with it but just in case you are not, this is the original baja built by Gary and Neil Emory back in 1967. I love the look of this ride.

I enlarged the Emory baja pictures as much as I could to get an idea of how he did it since I like the look of it. Since this thing was obviously hit at one time and not repaired the best, I'm not at all sad about cutting it up.

So I taped and lined out my cuts then I attacked it with my sawzall and circular saw with a metal blade on it. Went pretty smoothly and the cut is not bad. I'll clean it all up later with an angle grinder (once I get one, haha).

I think I came pretty close except for the bottom of the spare well, his has a definite lip to it since I can see the lights mounted to it. Mine, that was waaaayyy to rotted to save so I had to cut it back more. I might do something there, I might not but for now, all is good. I'm happy with the shape. 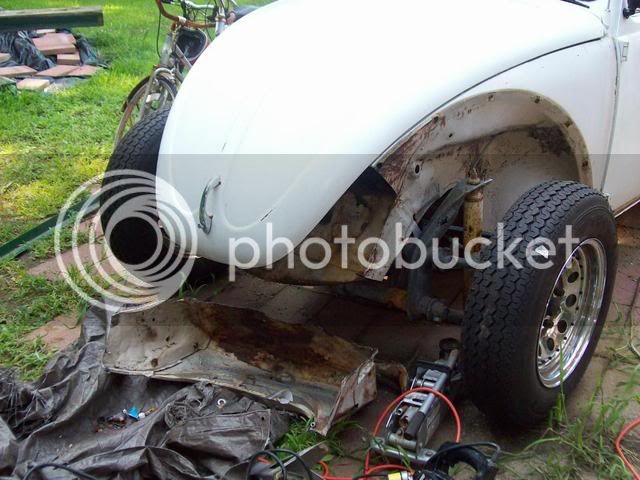 Then, I mocked up my front fenders and set up my shapes.

Then broke out the trusty saws again and after a shower of sparks and cloud of dust....

I think they came out pretty close to the originals'. I'll need to clean them up and reinforce them on the edges but I think I got the shape right (or at least close). I need to cut the hood but I want to reinforce the trunk area and build a panel to seal off the front first. I was going to use front fenders for the back but I only have one extra front. I might try to swap my extra rears for fronts, if that doesn't work, I'll try something with the rears.
KC1MUR
Bringing bus back from hibernation
Dirt cheap, all steel baja build
70s ProRally SuperBeetle veteran restoration
Top

Looks pretty slick so far, keep it up!

this is the car i built for the wife. i used front stock fenders for the rear fenders. never mind the shocks. i was young and didnt know better.

Yeh, like that. I noticed that the contour is off by a bit when you get towards the back of the fender area, obviously this is something that can be easily fixed once the fender has been cut some? The radius in those pics look pretty smooth.
I like the sunroof, was it just an open hole or could it be covered? Did you make your own lightbars?
KC1MUR
Bringing bus back from hibernation
Dirt cheap, all steel baja build
70s ProRally SuperBeetle veteran restoration
Top

i used pinstriping to lay out where to cut the fenders and front, kinda like you used the tape. you are able to make the curves. cut long and then look and then cut again if needed. i used a electric cutting disc. i made the light bar and bumpers from scrap from the local welding supply that brother in law works at. cant beat free.
the roof is another story. wife really wanted a rail. i opened it up for the wide open experience. i guess you could cover it with a snap cover.
Top

Next question: fender beading or no? I'm still not sure if I'm going to bolt or spot weld my fenders on. about 30% of the thread inserts have pulled out of the body so I'd have to weld ones back in. I know by bolting them in I can change them easily in case of damage. Dunno, still trying to figure that part out. If I do bolt them on, should I still use beading?
KC1MUR
Bringing bus back from hibernation
Dirt cheap, all steel baja build
70s ProRally SuperBeetle veteran restoration
Top

I'm familiar with the old Emery Baja Bug. I met him once and he checked out mine (also a '57 sunroof model). He still owns it, but it was rolled back in the '80's by his daughter's boyfriend at the time. He used to run a Porsche parts shop in Costa Mesa.

I've considered ditching my fiberglass parts and going all steel a few times. Maybe I will do that someday. I do plan to paint mine the same bright yellow as his.

I believe he reinforced the cut fenders by welding round bar-stock or using welding rod on the edges and then smoothing things out with lead. He also welded a lip to the cut edges on the body for a finished look and for strength.

Side glass was removed to reduce weight and replaced with custom side curtain windows that snapped to the body.

Here are some good pictures of that car:
http://emorymotorsports.com/index.php?o ... Itemid=111

P.S. I would recommend bolting on the fenders and using fender beading.
Top
Post Reply
321 posts

Return to “The Off-Road Forum.”