Are you one of those confused people who can't make up their mind?
Post Reply
29 posts

Here is my past build --

Back in the late 70's and early 80's these little Fiats terrorized G/gas and H/gas classes with Porsche motors and they asshanded many a V-8 during that time. The NHRA even made a rule to outlaw them by requiring a vehicle to have the same make motor as body to be under 85 inches in wheel base.

I always loved these little cars and when I found one rusting away in a backyard, I knew I had found a project -- - Back halfing a Fiat 600 with VW trans and motor

OK OK -- here is where we started at 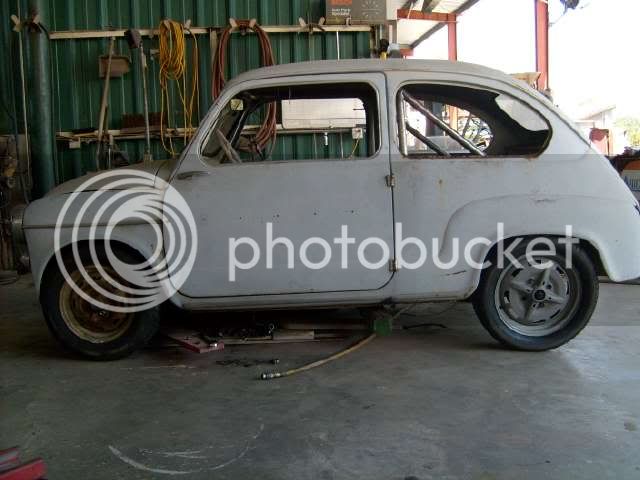 Then we were trying to decide what engine needed to be in this thing. I was wanting haul butt -- but the Money was tight. My buddy suggested this motor

just kidding this motor is in his Hudson Hornet -- cool huh???

Well, I had this 65 Fairlane that I hated and another friend loved the car and he had a big type IV motor so we traded and the Fiat ended up looking something like this

and this wasn't hacking it -- so the decision was made to go turbo. Well the guy who I got the type IV from -- now wanted the motor back because we had it running good and He offered to paint and fix the body work/RUST and this sounded like a deal and he even threw in a 2110 motor--so here we go again.

The motor was put in the car and then taken down to Tom Face at Scotty's Mufflers in San Bernardino for one of his custom Turbo systems with parts from AJ Sims lowbugget.com

Oh and it was painted at the same time

Some rims and we are done 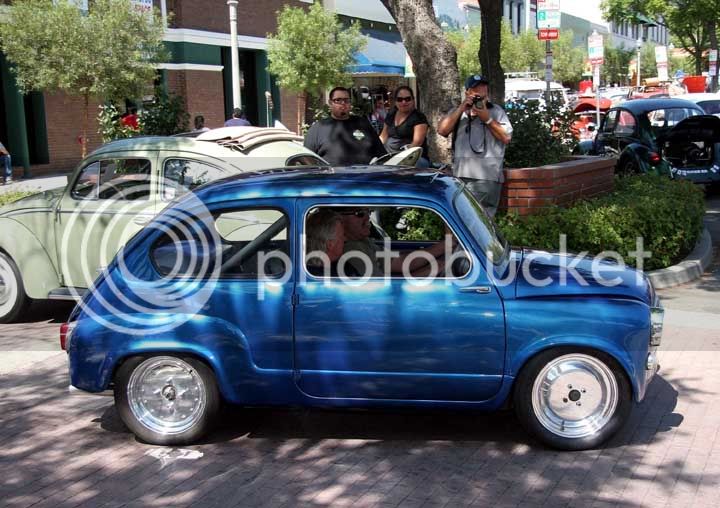 Now were are talking hauling ass

Or dragging Azz. Nice write up.
Hot, humid air is less dense than cooler, drier air. This can allow a golf ball to fly through the air with greater ease, as there won't be as much resistance on the ball.
Top

This is cool! I love those old Fiats...even better when it can hauls some ass. Nice ride. Any details on the conversion?
KC1MUR
Bringing bus back from hibernation
Dirt cheap, all steel baja build
70s ProRally SuperBeetle veteran restoration
Top

When we went to the turbo motor -- well, they couldn't handle the extra HP so we made these swing arms

damn, you weren't mucking round were you!

Very cool, and kind of a sleeper to boot!

can you post pics of your engine mount please. I have a fiat 600 body also and would like some ideas on fab out a mount
Top

so how quick down the 1/4 mile is it
Top

WOW That is VERY Bad Ass!

More details! Did you make a completely new frame for this, & did you use the original front suspension? Come on Man we all want to know what you did, that thing is SICK!!!
Top

It hauled butt -- Never got a good time at the tracks -

- that is my story I'm sticking to it
Top

that is a freeking awesome conversion.
Top

Very nice job on the car. Just a couple questions if you dont mind. How were you able to race the car if they had that silly rule?
Why couldnt you get a good pass on the car. Was it scary on the top end with the short wheelbase?
I only ask because I am building one myself.
Thanks,Brian.
Top

As far as going straight at top speed -- There was a lot of time spent on the stock front end and making sure everything was "right" -- I put Fiat 124 front disc brakes on it and rolled the top control arms to the rear of the car as much as possible and moving the lower spring as far forward as possible -- changed everything to new parts and new steering box polyeurathane bushings -- took a lot of recommendations from the guys that are road racing these 600's in europe -- used every ABARTH (road racing Fiat guru) part that I thought would help me. Car would go straight and turn as required up to 140 mph ( I turned into girlie-man at that point).

Good passes were hard to come by or I had bad luck when i took it to the track -- Would be running real good and blow the intake gaskets out (Highly recommend metal to metal everywhere) -- another time running really hard and drove through the clutch in 2nd and 3rd gears (burnt it to the ground) and by the time I did a change at the track it was into eliminations. The last time out to the track which was where that giant wheel stand picture was taken there was another wheelstand hitting 2nd gear and the car went left and I backed out of it landed real hard and broke a exhaust tube at a flange limiting the boost to 10 psi-- another time had the turbo break --

This car was built with several personal restriction placed on the build (like I wanted it to have a stock appearance ((no wheel flares which limited size of tires)) and the motor hidden) and on a tight budget shooting for 90% street and I drove it almost everywhere and just 10% track -- this meaning there were a lot of high dollar parts on it but there were a lot more high dollar parts NOT on/in it -- so reliability in a racing situation was not a given.
Top
Post Reply
29 posts