Do you like to go fast? Well get out of that stocker and build a hipo motor for your VW. Come here to talk with others who like to drive fast.
Post Reply
11 posts • Page 1 of 1 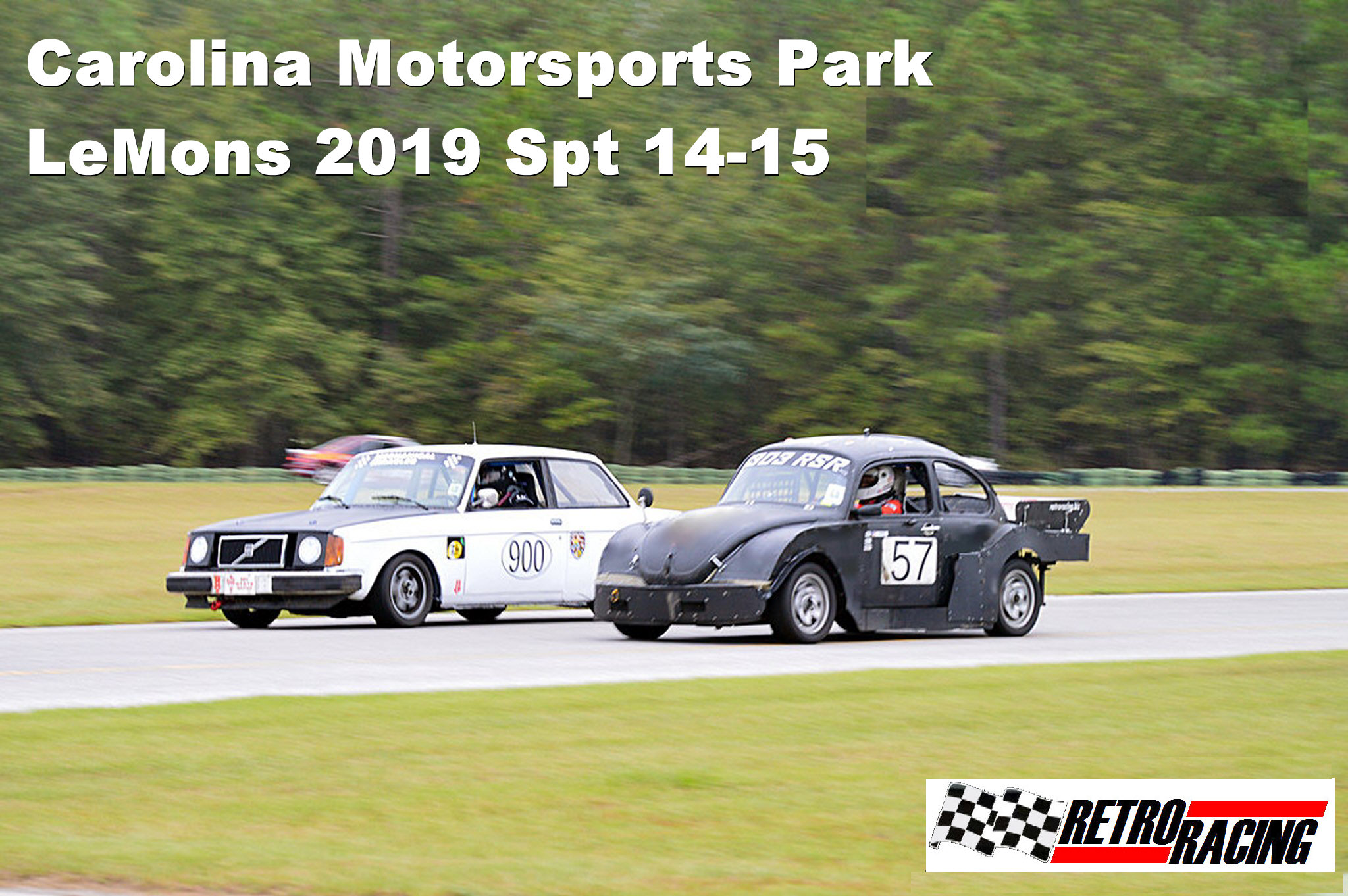 Friday, 13 Spt. 2019 Practice
South Carolina. The weather is hot, hot. Direct sun makes it too hot to walk barefoot over the bare sandy spots among the track's short dry grass. This event marks Dr. Steve's return to racing since his leg-twisting mountain biking accident last September. But all he needs is some retraining on dash switch changes. He takes the Blitzwagen out for testing and practice. Steve and the Blitzwagen are both doing well together. 220-240° oil temps. Both going strong and smooth. The stinger's song keeps us aware of where he is on this flat, rambling 2.27 mile circuit. 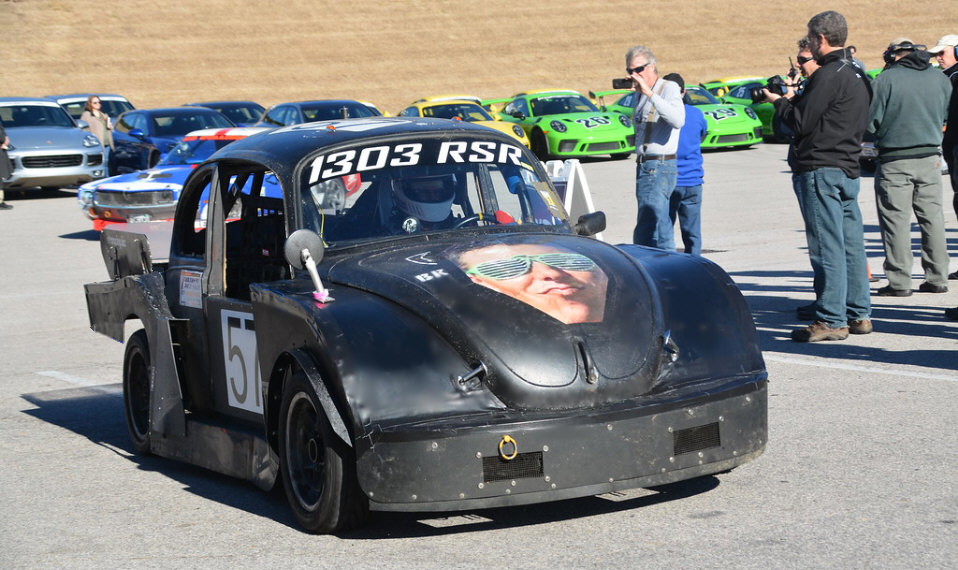 We've missed Dr. Steve, even run an image of his face on the Blitzwagen's hood to show our feeling for his absence, but his absence has made our other drivers step up their game to compensate.

Retro Racing's Blitzwagen team has evolved from a few starry-eyed volunteers in 2010 to a genuine team today in every sense of the word. Jamie (aka Jamrod) drives rapidly and conservatively. Johan (Hawk the Hammer to this inner circle), is mastering less ramming while adding speed, David is very fast and easy on hardware, and Justin is fast but drives win-or-break. Jamie, David, and Justin do double duty as mechanics, punishment for their technical sins. I'm the crew chief and carry the clipboard. Once Steve finishes practice, Hawk rolls the Blitzwagen through afternoon LeMons tech. 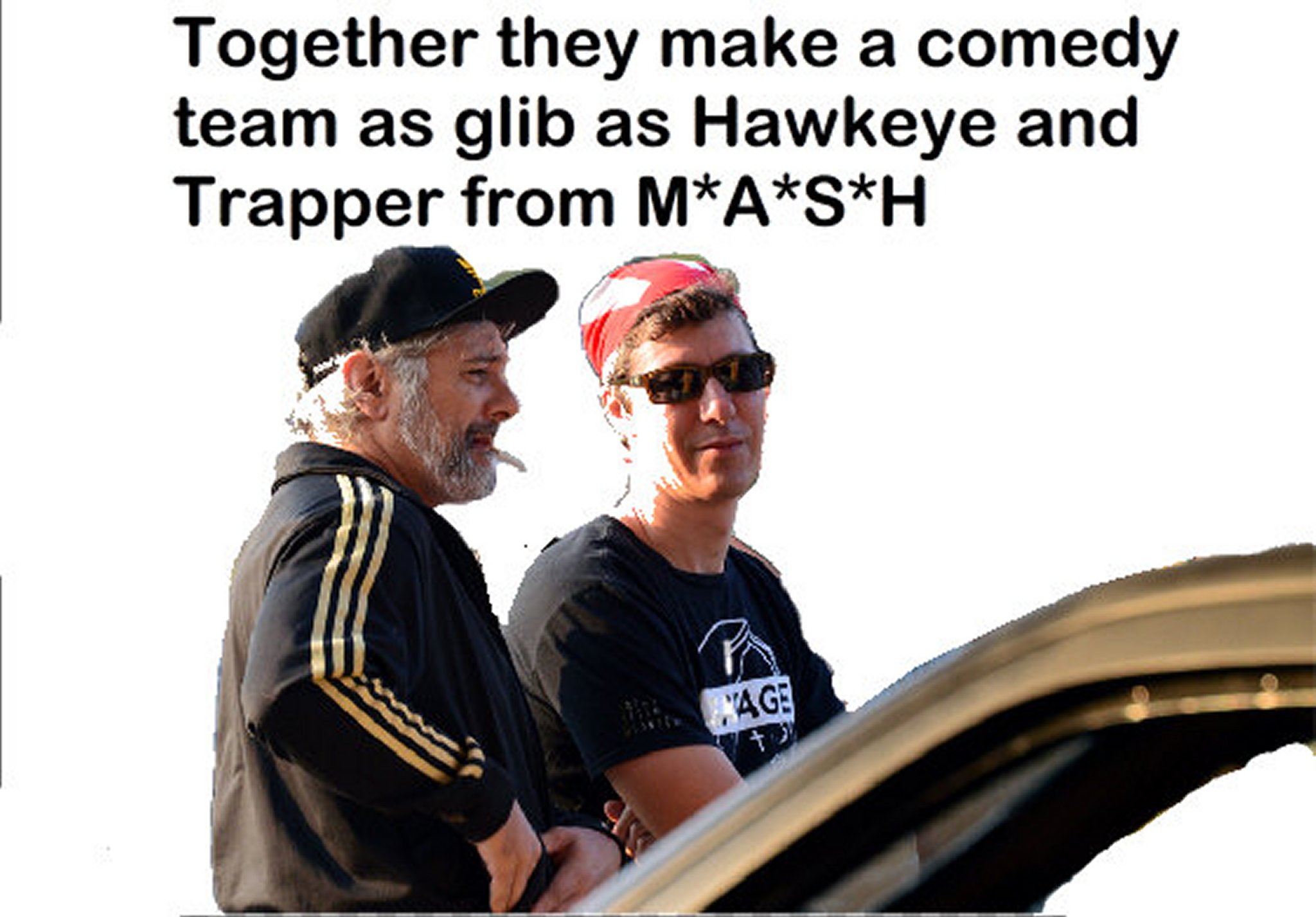 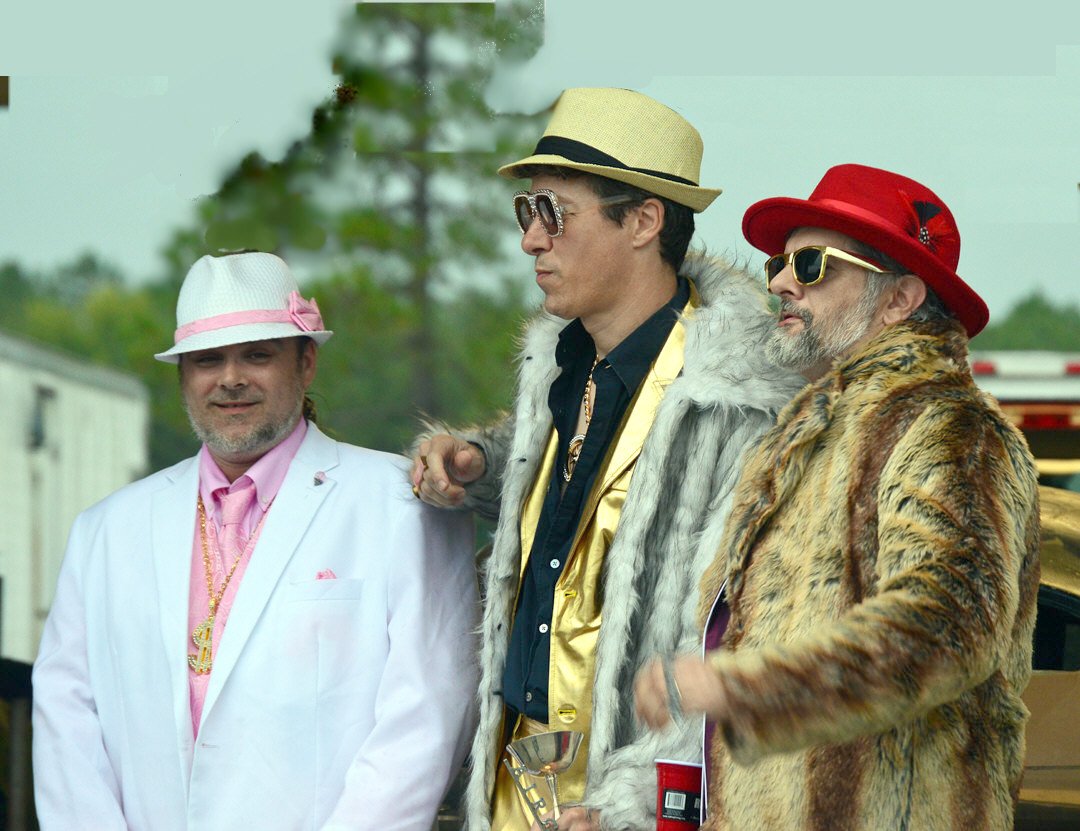 Left to right, much as it would have been at the line-up. Justin (the pro) teaches two young innocent doctors how to pimp.

Friday nights are famous at the CMP Fall race, because it is LeMons party time in Camden, a nearby town. This is where the block party dress-up for the racers allows the ids to come out of the closet. As usual, Hawk and Steve conspire to disable the competition with free to all 150-proof booze mixed with energy drink. Also, I could not find our octane booster stash the next morning. Better not to ask. 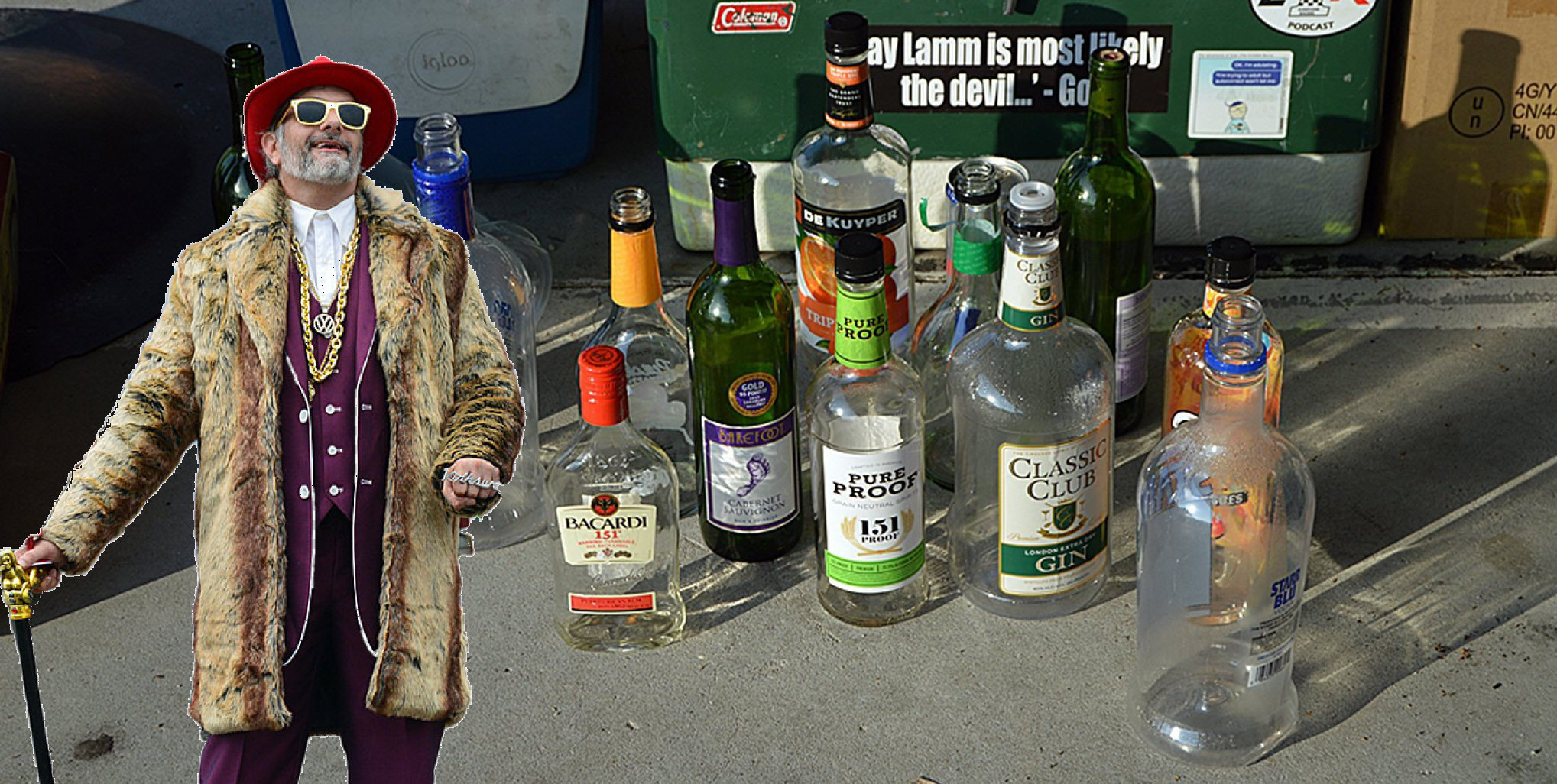 King for a Day
14Spt19; Sat. Race day is overcast, the clouds blocking direct sunstroke. There are about 98 cars in the field. We have the usual LeMons A, B, and C classes. We are in C, the largest class. We have proven ourselves as the fastest regional C-car in the last two races (Road Atlanta and Barber). The race will run for 14 hours, split between Saturday and Sunday. Jamrod hydrates the team with fresh coffee. I watch over the driver's meeting trying to gauge the effectiveness of Hawk and Steve's free booze. Yep. Some of the driver's look like dead men walking. Wait until they burp inside their helmets and warp their visors.

We went from competitive to fast mainly because of a change from a 3.88 top end gearbox to a 4.12 final drive close ratio 3rd-4th which kept us in the power band, dropping from big 36mm top-end venturis to 34's in our Kads, and under-camming a bit, from a C95 down to an Engle W125 with 1.25 rockers.

Today our power comes from a freshly rebuilt 2.2 litre Nikasil and SS pistons engine, and 44mm throttle body single bbl Solexes (Kadrons) on 160 mains, and 33mm venturis. With its open stinger exhaust, the engine explosively roars. It makes your eyeballs vibrate. Why 33mm venturis instead of standard 34's? We had these custom made back in 2017 in a test to see if we could get more intake velocity punch coming out of the corners (compared to a 34mm) without sacrificing too much top end. The test answer so far is maybe. At least there seems to be no negative effects. 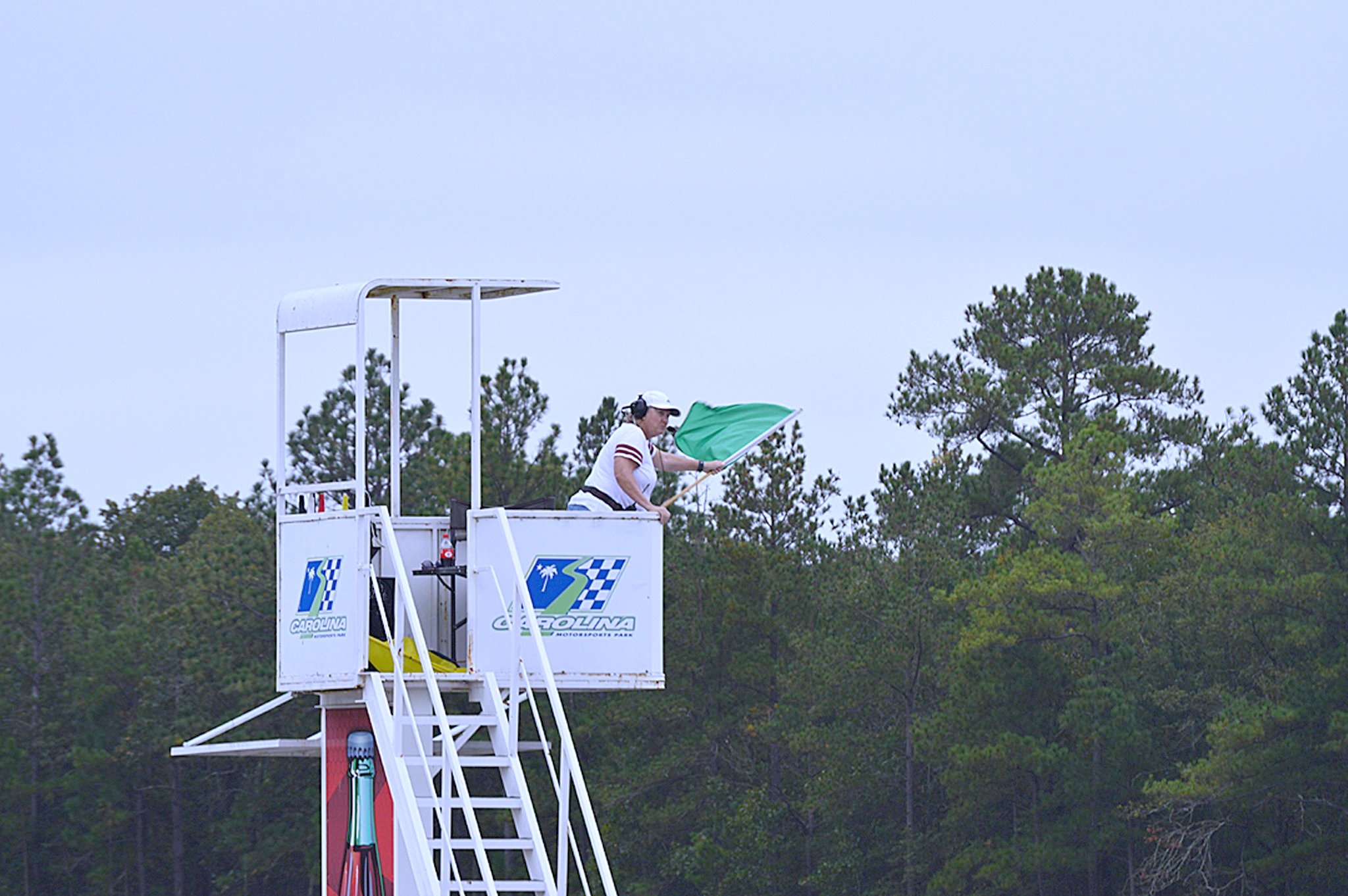 The green flag whips at 10:00 hrs. Jamrod is our first driver. and even though considered conservative, he soon has us in first place C Class. Then as suddenly, he gets black flagged and on reporting to the tower, is told he is not authorized to be on track because he has no window sticker.

But wait. The Blitzwagen has a window sticker, right there in the black-robed judges face. So they shift attacks. How did we get a sticker if we had no tech paperwork? Was this more harassment because we have a VW and a fast one at that? Then, as Hawk argues with the officials, our paperwork mysteriously appears. We have been docked two laps (which later we will be reinstated), but we have lost 1st in class.

Jamie is being pressed by a C-Class Ford Ranchero (Team Old Dudes) with a fully race prepped 289 V8 in it as he tries to regain 1st, does, but looses it again as we do our first refuel and driver swap.

Dr. Steve takes over, back on track at 11:30 and gets no more than a couple of laps in before the entire race is black flagged because of a serious accident. Bad accidents were to be common this weekend, as we had at least two more total race stops for wrecks. The most spectacular of these was a big Ford sedan that was hit, and spun off track to plow through one of the sandbagged workers stations. 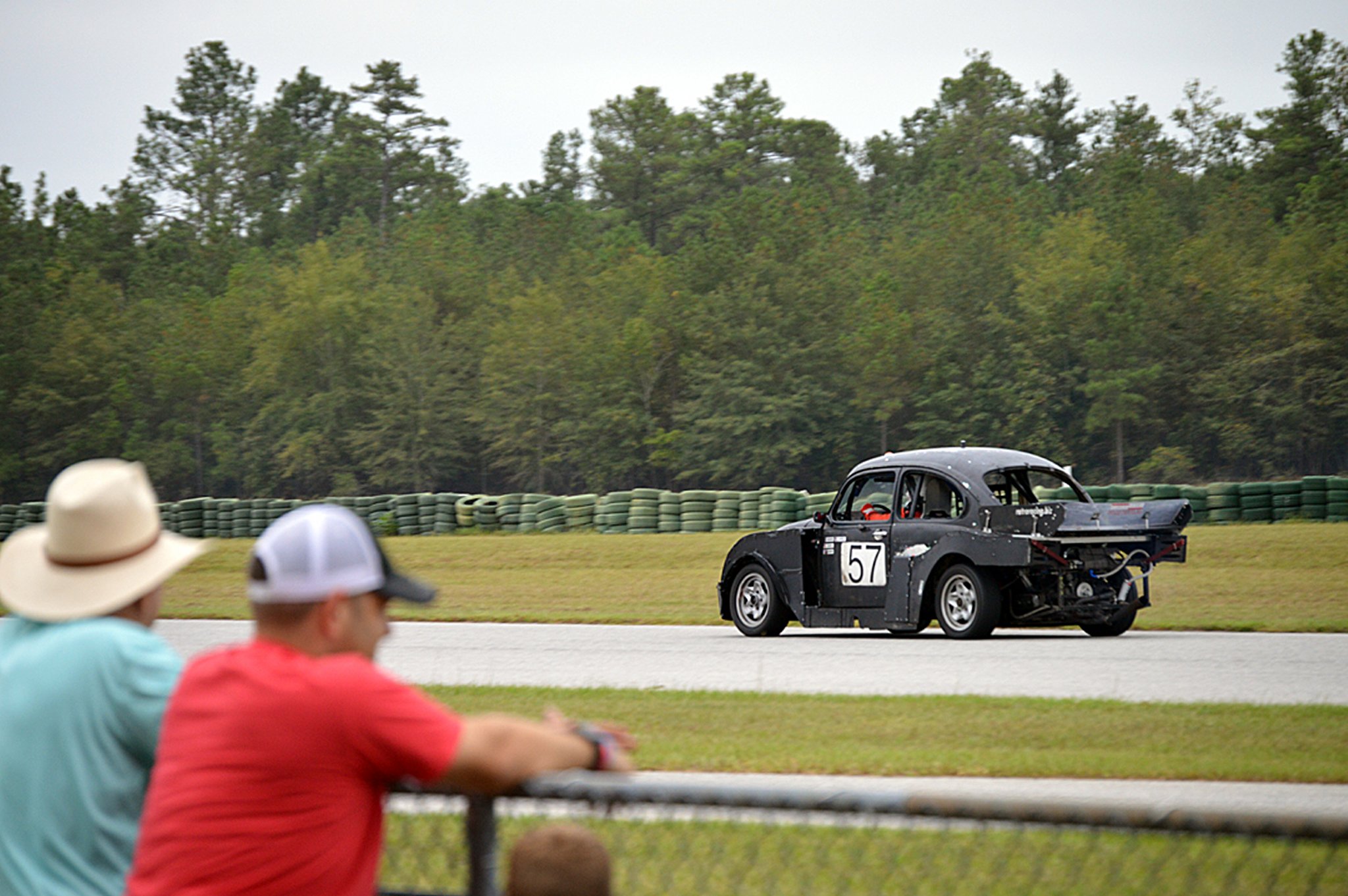 During the black and/or yellow flags delays, Steve throws a fan belt and makes it back into our garage for a new one. For us, a thrown belt is a rarity. The last time the Blitzwagen threw a belt was 2011. I use a slight offset alignment between the top and bottom pulley's to maintain belt tension. This is a personal preference and it has worked very well. But what's happening here is because we were not paying attention between building and stripping several engines, and a blower housing with alternator and balanced racing fan has been mismatched from its engine. The pulley alignments are wrong.

Steve is back out at 1300 hrs., going hard, and makes it safely through his stint to hand over to Johan. 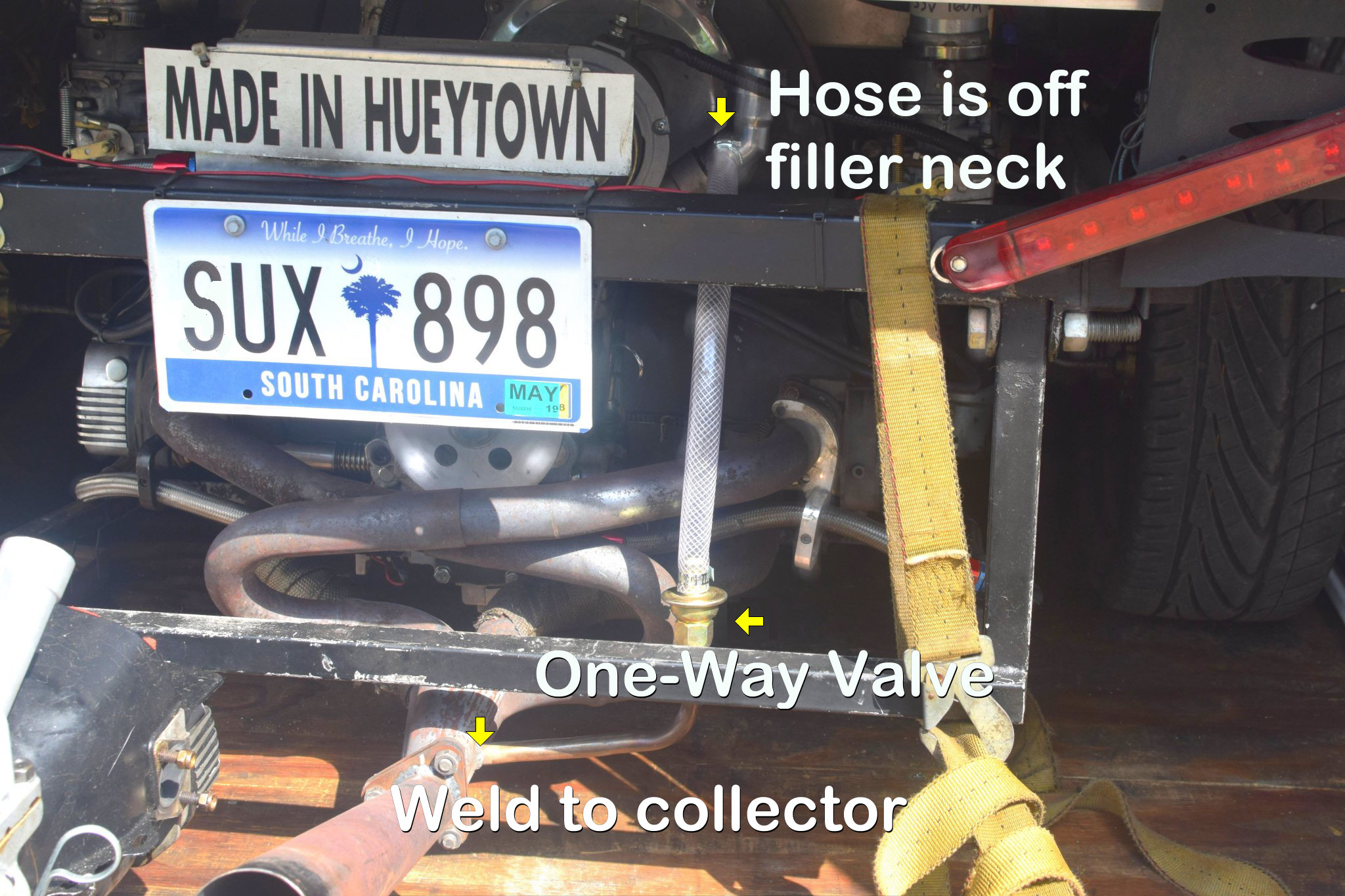 We are trying something different this time. David has installed a vacuum extractor crankcase breather system on the Blitzwagen. It consists of a metal tube and a one-way valve from the exhaust 4-into-1 collector, connected to a vent point on the engine. The crankcase pressure is literally sucked out, the one-way valve preventing pressure from reentering the system. David has this same setup on his street Bug and for him it works fine. It does not generate smoke on his car by reburning the oily pressure being sucked out of the case in the exhaust collector. 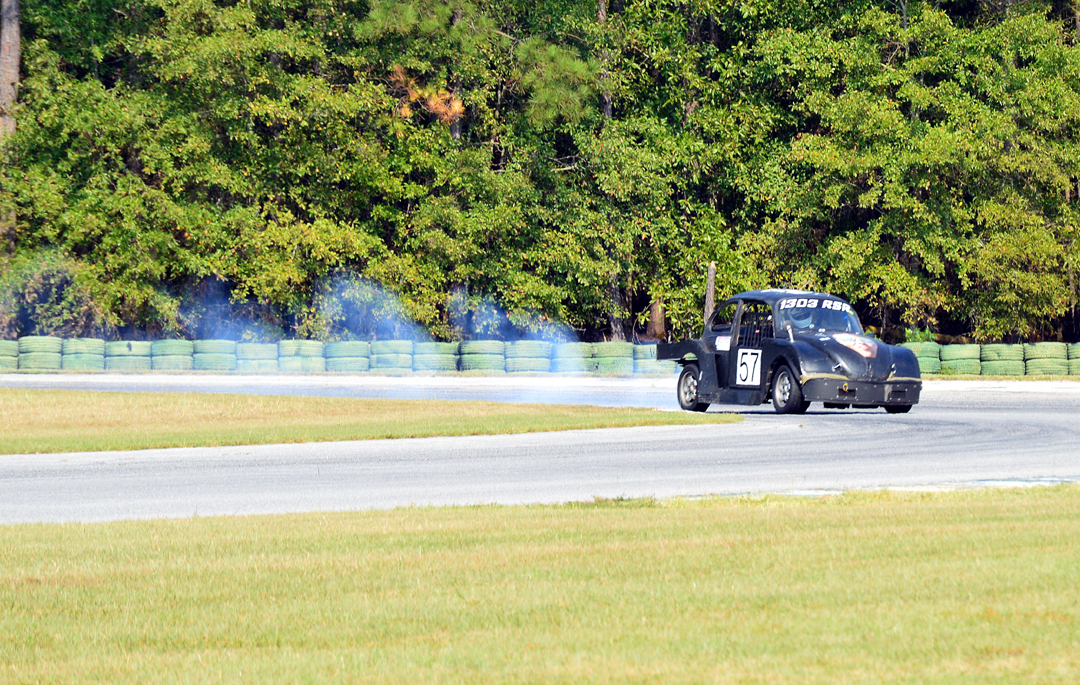 But, on the Blitzwagen, the system has been problematic since Friday testing. At times it produced smoke. David reconfigured it but the smoke issue became worse, not better. Hawk gets black flagged for smoke at 1420 hrs. This time David vents the flex tube to atmosphere, no extraction involved, and the smoke goes away. 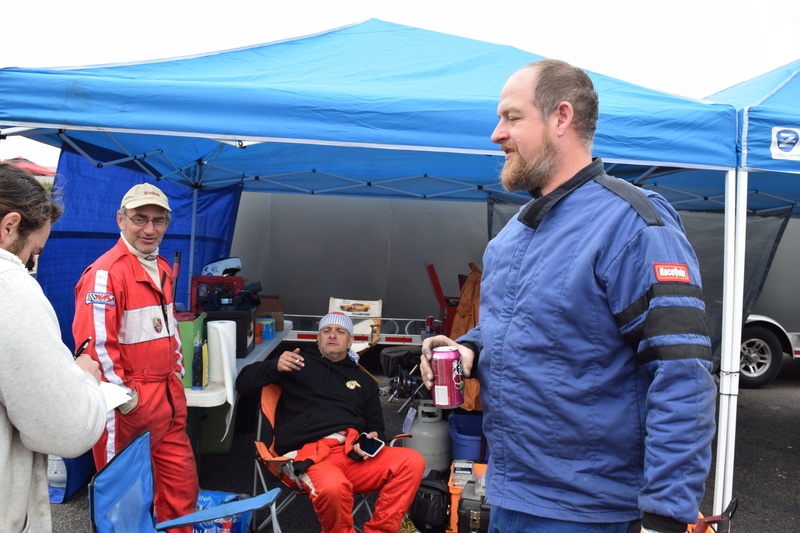 David takes over at 1435 hrs. We have lost down to 3rd in class, and he is going to make it up. The Blitzwagen is handling great, fuel consumption is normal (5 gallons per hour), oil is at 240° F., and the brakes are holding. We have 4-piston Wilwoods up front and 2-piston ATE copies in the rear, all on Porterfield pads. Wilwood racing brake fluid.

Because the Blitzwagen now has a 930 "slantnose" front fender profile which shrouds the brakes, and we have not run tubes from the airdam inlets to the front brakes, we are risking front brake overheating in this 90° F. + ambient weather. 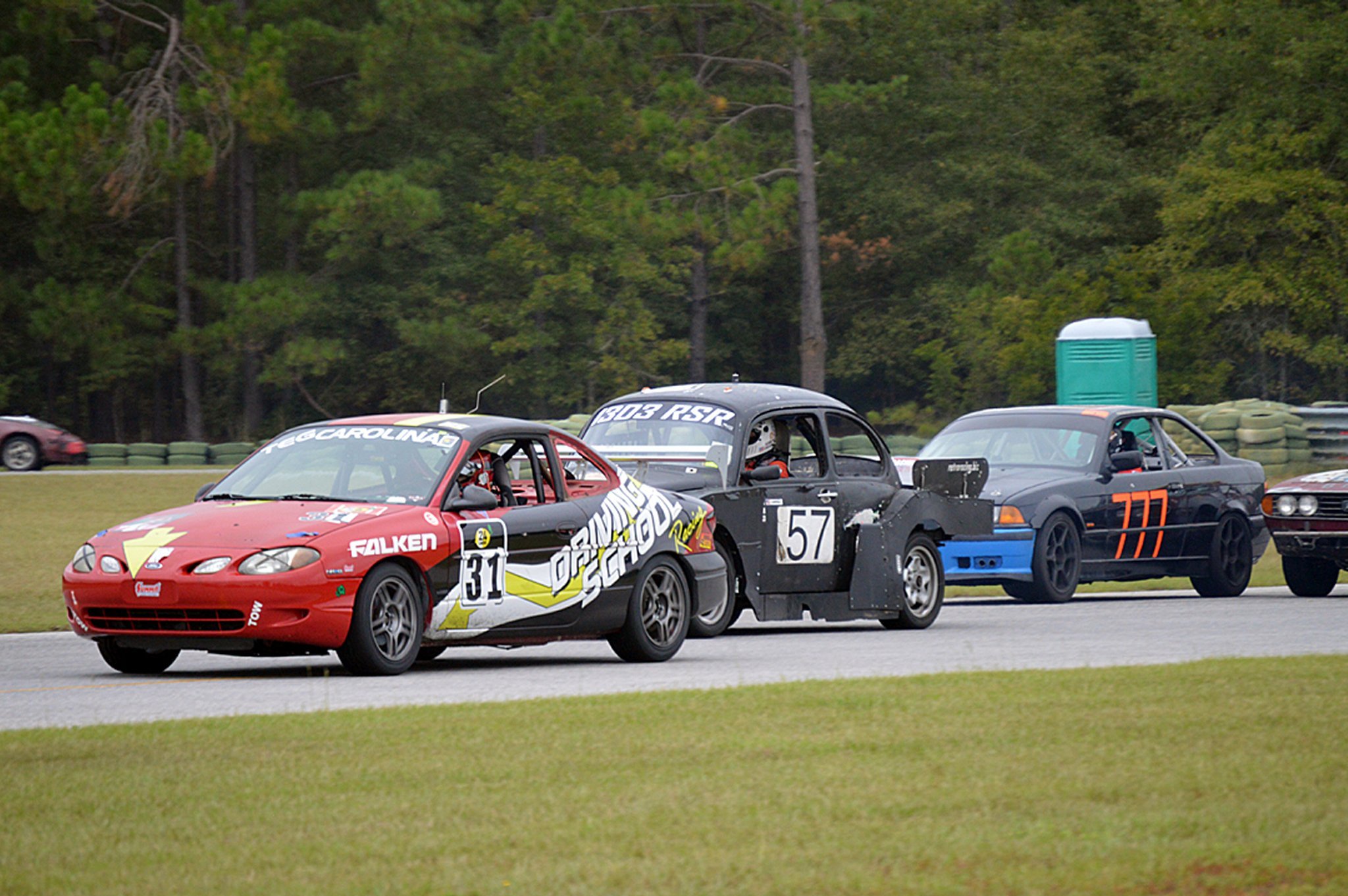 David flogs the Blitzwagen to 1615 hrs and hands over to Justin We are two laps off first place. David has turned our fastest lap of the day, a 2:06. Last year, under cooler, damp weather, David had also set our best lap, at 2:03. 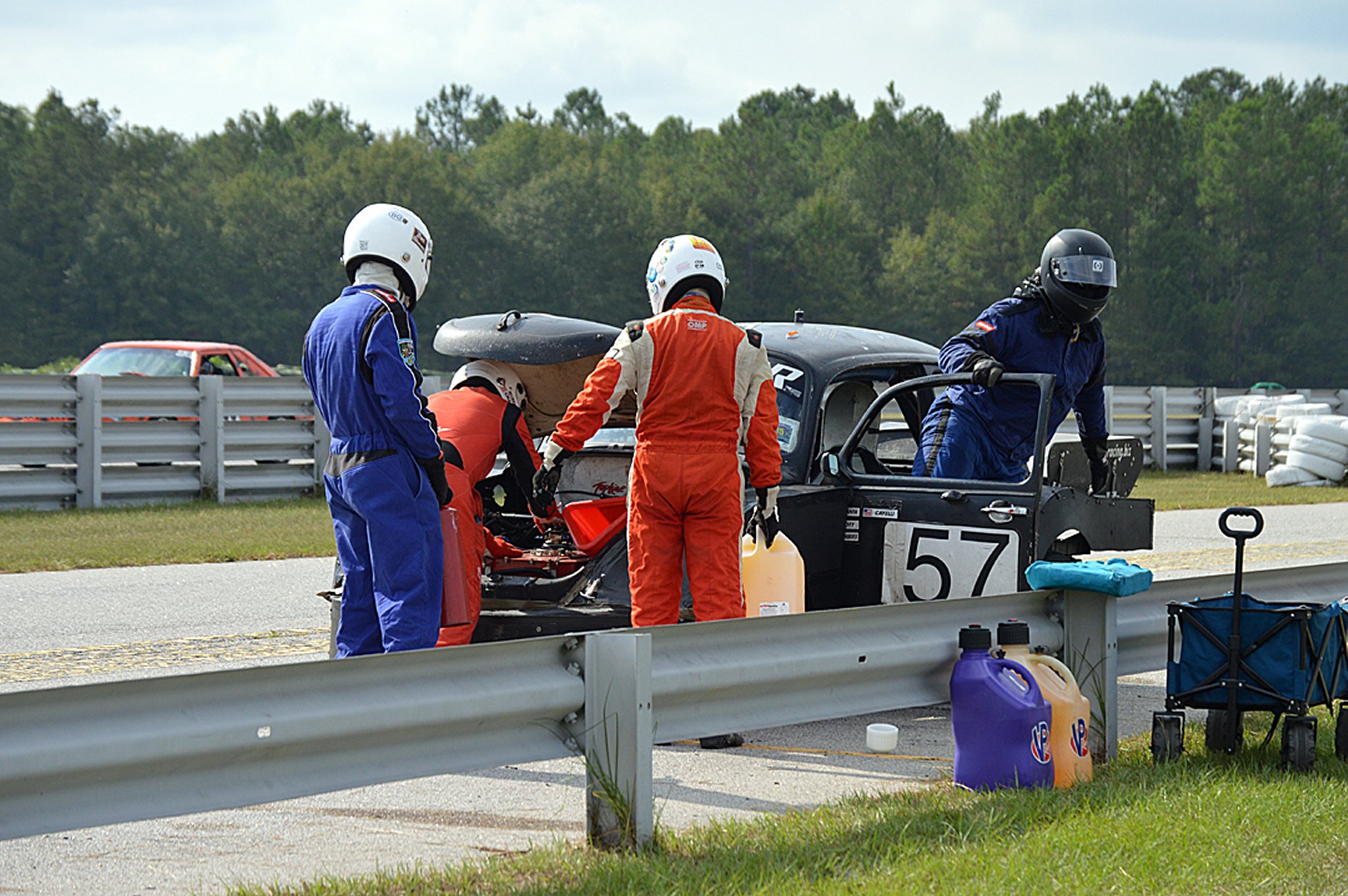 David jumps out, fuel pours in.

What with all the yellows for spins and our fan belt and smoke fixes, we have bounced between 1st and 3rd all day, depending on fuel stops. We've got a 1971 "Duff Beer" Triumph TR7 V8 and that 289 Ford Ranchero swapping positions with us. We are working our simple single barrel Solex-Kadrons and 2.2 litre engine to the max. 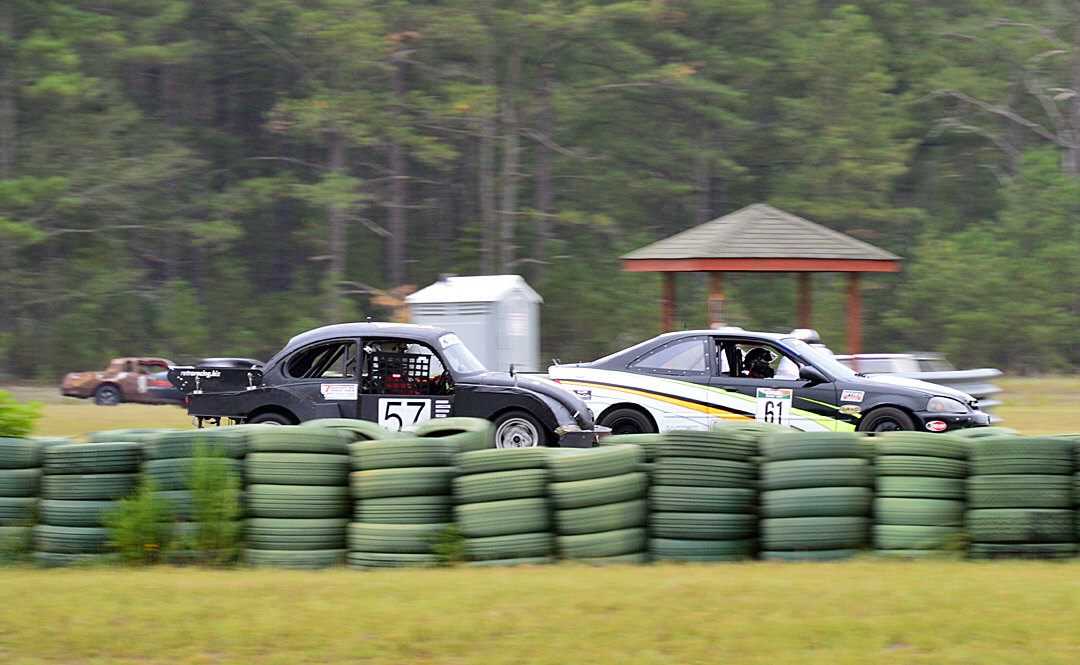 The Saturday checkered flag is due at 1730 hrs. Justin is driving like a madman. He regains 1st place for us.

Then, just after 1700 hrs the racing gremlins stepped in. The brakes faded and the engine started to knock. We have enough lead to allow Justin to come in. We discover we are very low on oil. Where did it go? No leaks. We add eight qts of 10w40 Lucas Classic Hot Rod Oil to our 3-gallon dry sump tank. The brakes are extremely overheated. That means steam in the lines.

While the car is in the garage, we see something wrong. The single crankcase vent, the clear plastic tube, is cinched off tight, closed with two plastic tie straps, holding it to the engine cage. Crew error. We have been racing since 1430 hrs with NO crankcase ventilation. Had we blown quarts of oil into the combustion chambers and somehow burned it without tell-tale exhaust smoke? We cut away the tie straps and send Justin back out, the brakes having cooled enough to try and work again. 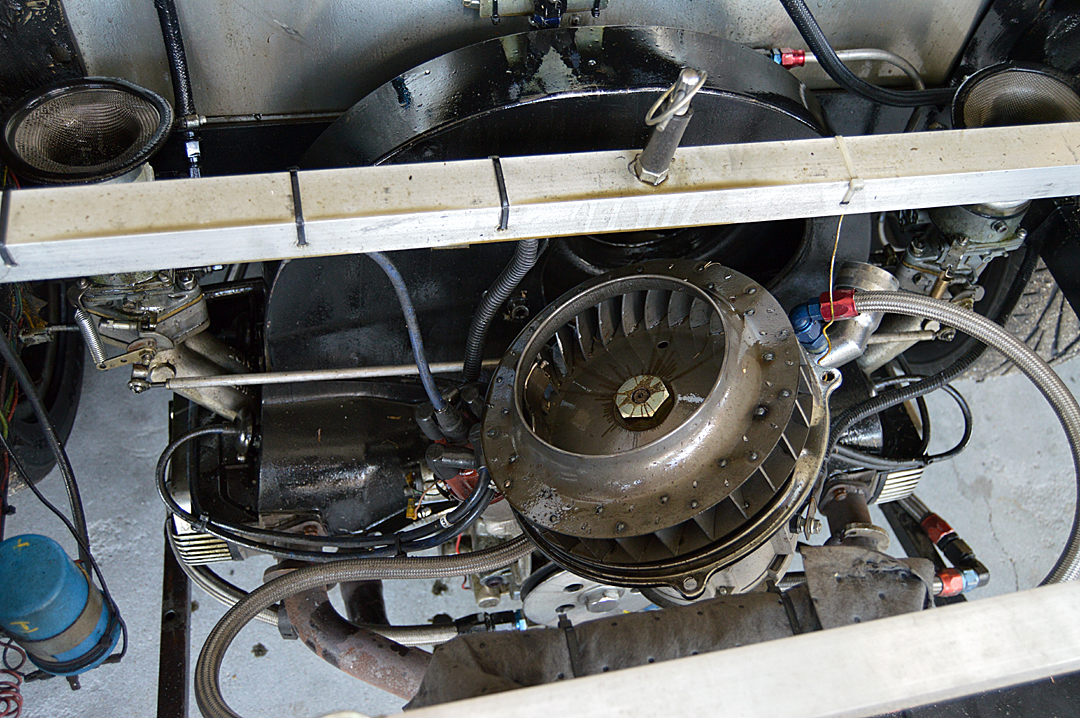 There was about 20 minutes or so to the checkered flag and end of Day 1. We are leading in class. And in the heat of battle we threw a rod on cylinder #1, which smashed through the top of the aluminum case. At first look, it appears we lost the big end of the rod due to broken rod bolts. These were EMPI H-beams, with EMPI 8308 ARP 2000 H-Beam 5/16" Rod Bolts 220,000 Psi Tensile Load, Set Of 8. 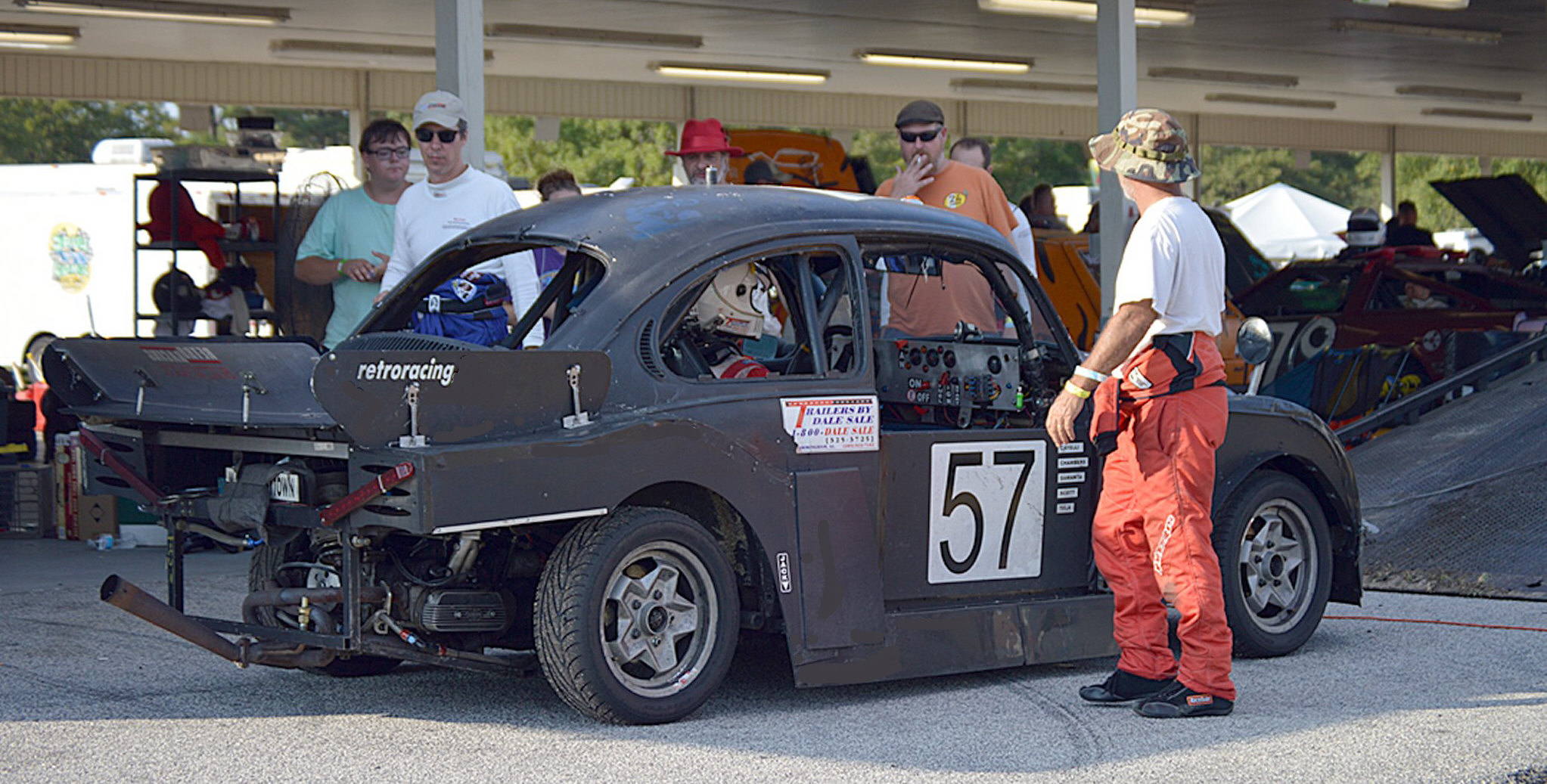 15Spt19; Sun. No good news to tell today. David and Jamie did an engine swap last night, and bled the brakes. But we got no more than an hour on track before something vital failed in the close-ratio transaxle. So, we grimly pack up and tow away as the event continues, tired, hyper, our minds still racing. Looking forward to the next one.
Top

think the rod let go due to going low on oil ?
Top

The whole lower strap of the rod was laying inside the displaced fan, flattened straight. With both broken bolts in it. There was no heat bluing on the strap. The bearing is missing. We havn't split the case yet to directly examine the crank, but right now we're leaning to bolt failure due to imitation Chinese ARP-style bolts.

ARP is a product name, such as Ford, not a specification. We talk of using ARP bolts, but unless they are ARP by brand name,

Ah yes I see it now! Wow!
Yeah that’s true, and I’m guessing they have a variety of strengths too (and costs)
Top

I really love it to read these posts..

Hoping to see you guys go all the way to the podium soon.

Did you kick Barret to the curb? Do you always allow people to smoke in the pits? Why are there no pictures of you?
Top

Barret still works on the Blitzwagen, but swapped over driving to the "cars-you-have-to-wax" genre, meaning the Karmann Ghia and Historic Sportscar Racing. Also, LeMons allows smoking in the garage areas. Fuel storage and refuelling is not allowed in the garage areas.
Top

Great read, thanks for posting! I was away from the site for a while so I didn't get to read it when you originally posted it.
Top

We expect to run CMP in the fall again, a full 24 hrs straight. We've been prepping through this lockdown and we need really badly to race somebody somewhere. We're going to do a local track day test on the Blitzwagen on 15 June, coming right up. I'll get out a short writeup on the test and photos of the much improved Bug.
Top
Post Reply
11 posts • Page 1 of 1